John Chow is networking with local bloggers in Vancouver in addition to attending big live events like the recent Affiliate Summit West in Las Vegas.

The Dot Com Pho in Vancouver is a regular weekly meeting where local and visiting bloggers network and keep one another up to date about their blogging lives.

The fact that John Chow came to the first Vancouver Dot Com Pho lunch meeting in 2011 right after attending the  Las Vegas Affiliate Summit West shows clearly how much value he places on networking with other bloggers at live events no matter whether they are small or big.

It’s always refreshing to see how he interacts with other internet marketers no matter of how small, big or non existent their achievements are.

This time we had two new bloggers attend and they were welcomed by everyone and felt comfortable right away.

You can see them in the picture below. 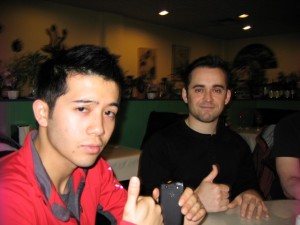 Ed Lau who is notoriously famous for being late didn’t disappoint once again. I didn’t capture his image this time as I have put away my camera by the time he arrived but you can see him in a picture inside my other post, just click here.

Below are two videos of which one shows John Chow being interviewed by me and the other shows him eating, filming and discussing with other Vancouver bloggers. There were no visiting bloggers from far away this time.

I learned more from and about John Chow again. He places a very high value on networking with other bloggers and internet marketers.

I knew that already but his coming to Vancouver’s Dot Com Pho straight from the Affiliate Summit West in Las Vegas really made a strong impression on me.

That made all of my previous harping on the importance of internet marketing networking and of meeting bloggers live worthwhile. 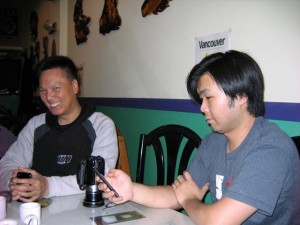 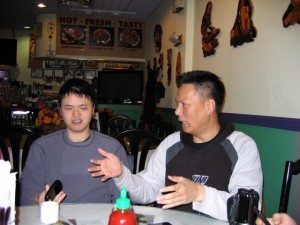 I also enjoyed meeting the blogging newcomers especially because one of them is an avid badminton player and he’s been blogging about badminton for years.

Badminton is especially good in winter when the tennis courts outside are soaked most of the time. Playing badminton outside is tricky because of the wind at any time of the year, so it is mostly an indoor game anyway.

And I learned more about and from the regulars, especially about Stephen Fung and his video expertise.

What do you think about John Chow’s live event networking activity and his view that it is one of the most important activities you can do as an internet marketer or as blogger who wants to make money online?